I have been cooking up a storm lately, however, it seems that I continue to have a sort of writers block. So I’m going to let this delicious recipe talk for itself. I hope you enjoy it as much as I did! 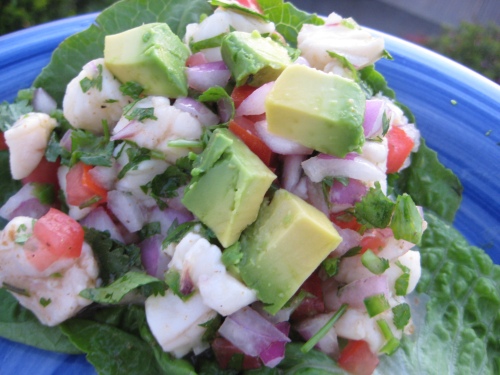 Put the fish into a nonmetallic bowl and cover with the citrus juice. Mix thoroughly, cover with plastic wrap, and refrigerate for at least 4 hours. Drain off excess juice and an hour before serving, stir in the tomatoes, onion, and jalapenos. Add enough olive oil to coat. Add the salt, pepper, and oregano, and return to the refrigerator until just before serving. Taste for seasoning and mix in the avocado. Sprinkle with cilantro.

And if you happen to be worried about fish parasites or other nasty no-cooking diseases, I recommend that you freeze your seafood for at least two days and then thaw it in the refrigerator overnight. The freezing will get rid of anything on the fish.

I’m going to start out by telling you a little about my Louisiana–>New Orleans trip: there’s definitely a reason it’s said that they are the masters of fried food… and believe me I ate a lot of it :). I figured I could treat myself with Cafe du Monde beignets since I do normally eat healthy (my mom and I have since made a pact to eat only salads for a couple of days just to counter-act the grease and not-so-healthy foods we ate while in New Orleans). Basically we ate, walked, and did all of the normal touristy things 🙂 (I have a ton of pictures to prove it). Sadly, we did not make it to the coast because most people we asked about it said that most of the beaches would be closed and that you can see everything better on the TV anyways. Even in New Orleans, however, the devastation of the oil spill has started to have its effects. We may have been there one of the last weeks that we could still have seafood at all (for awhile at least). Many restaurants had stopped serving seafood dishes (and in a town that is known for its seafood this will have effects on other things such as tourism). The people in New Orleans are still waiting to find out if the oil will travel into their town, but the effects have definitely already spread. My mom and I had a great time there though! Here are some pictures from our trip: 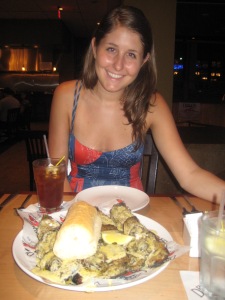 Char-Broiled Oysters from Dragos->theres a reason it's a New Orleans institution. I actually have a cookbook with the recipe so I'll green it up and post it someday. 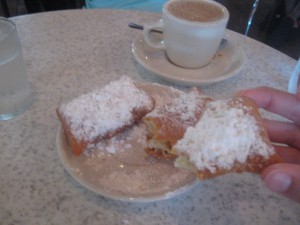 I'm pretty sure if you're in New Orleans you HAVE to get a beignet and a chickory cafe au lait from Cafe du Monde. We got them twice!! 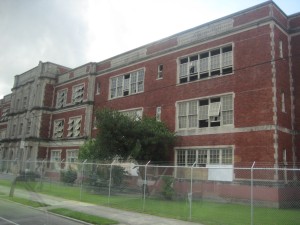 There's still a lot of work to be done from Hurricane Katrina. Only ~380,000 of the million people that used to be in New Orleans are back. 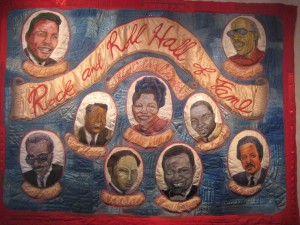 I loved this quilt! It shows some of the all-time jazz musicians. 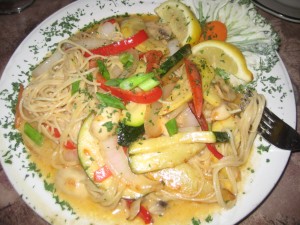 We tried to be healthier with this vegetarian pasta... but because we were in New Orleans where there's such a strong French influence, the delicious sauce was super buttery. 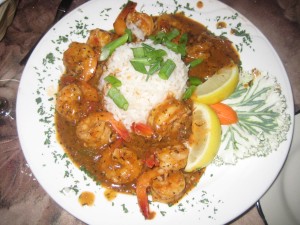 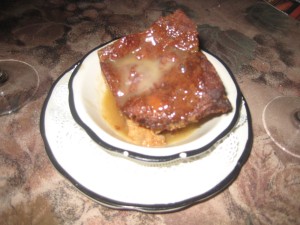 No trip to New Orleans is complete without bread pudding! 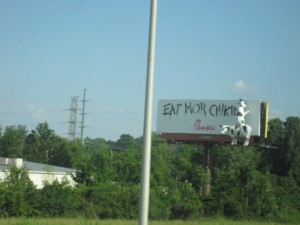 This ad is actually in Nashville but I find it so funny and you should eat mor chikin than beef if you want to be "greener" so it was appropriate :).

Since we’ll be eating salads, I decided to spice it up by making a tostada in a tribute to the south-of-the- border country I will be in soon (I’m going to be researching whale sharks in Baja, Mexico for the end of July). 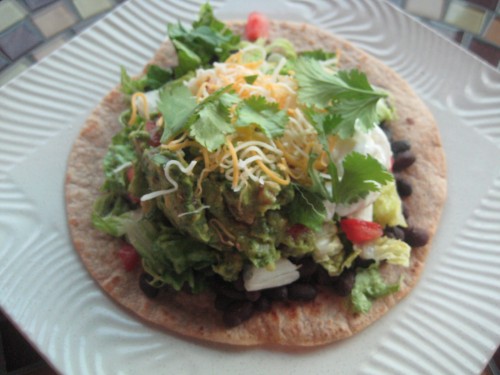 Mix all ingredients together with a fork until blended and the correct texture.

So… I know I’ve given you guys a delicious fish taco recipe already but let’s be honest: it was not the healthiest of fish taco recipes. And though this is a blog about being more eco-friendly in the way you eat, I’ve begun to realize that doing so is pretty linked with eating healthier. Plus, this fish recipe is for a tacorito… not a taco.

Here’s a little backstory: my mom is an amazing cook and we made dinner together the other night. Shrimp and a delicious fruit salad (see recipe below). Between the two of us, however, we could not finish off the shrimp. The next day for lunch I came up with these bad boys. Super easy yet super addicting and delicious. I call them a tacorito because with so much yummins inside of the tortilla, they were too large to be a taco but too small to be a burrito. Here’s what I did: 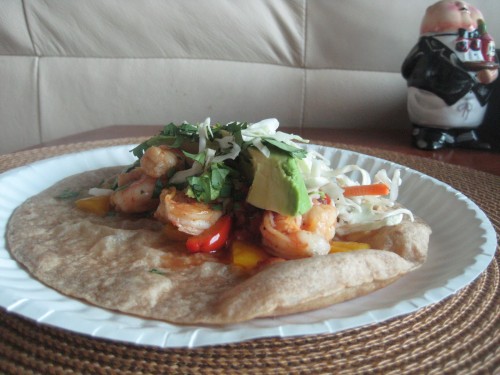 Place some EVOO in a medium pan and saute the bell pepper until just warm–>keep it crunchy for a good texture! At the same time, in a different part of the pan heat up the shrimp. When warm, take out with a slotted spatula leaving the EVOO over some heat. Place the tortilla in pan. Top with cheese (if used) until just melty and then add the shrimp, bell pepper, and salsa. Take off heat and top with all other ingredients. Fold it up for a delicious tacorito! 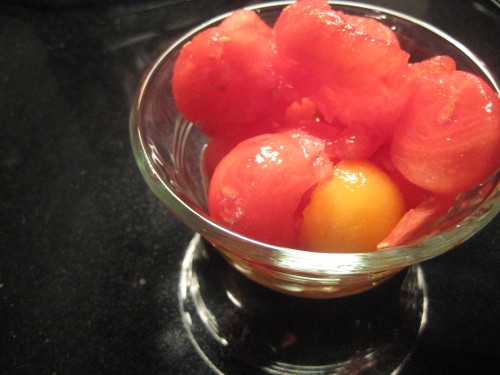 (Recipe courtesy of my mom)

Place the mint in the hot simple sugar and let steep. Place in the refrigerator until cold. Pour through a fine strainer to get rid of the mint leaves. Place melon balls in the infused simple syrup.